I do believe this scripture aptly applies to Bethel Bailey, who passed away this year (2012)in Sudbury, Ontario, in the midst of a work he both started and loved. In fact, his life can best be defined by scripture, which he lived by.

He preached the Word both in season and out of season and especially the latter even when it was unpopular in the brotherhood.

‘Preach the Word; be prepared in season and out of season; correct, rebuke and encourage-with great patience and careful instruction. For the time will come when men will not put up with sound doctrine. Instead, to suit their own desires, they will gather around them a great number of teachers to say what their itching ears want to hear.’

Some people are ‘risk takers’. They love to play near ‘the edge’. They love to ‘push the envelope’. Bethel would not ‘risk’ salvation by playing near the edge of the spiritual abyss pushing the gospel’s envelope, once for all signed, sealed and delivered by the Holy Spirit, through Christ by the power of the Most High (Galatians 1:5-8). When pushed with the point of life’s challenges on his back he walked the plank of faith. Bethel was led by the Spirit, walked with Christ and the Father always had his back.

This was the kind of risk taker he was.

'Have I now become your enemy by telling you the truth?' Galatians 4:16.

This was the kind of edge he would engage.

‘Be merciful to those who doubt; snatch others from the fire and save them; to others show mercy, mixed with fear-hating even the clothing stained by corrupted flesh’. Jude 22-23.

This was the kind of envelope he pushed.

‘I am not ashamed of the gospel, for it is the power of God for the salvation of everyone who believes: first for the Jew, then for the Gentile’. Romans 1:16.

If Bethel and his wife Blanche paid you a visit, you soon knew what he was there for and what you were in for. At some point and in some way he would find or make opportunity to open the gospel door. He wouldn't hesitate to step through it and he was no quitter. Where and when others wouldn’t even start, he would never give up.

Have you ever heard the phrase, ‘leave no stone unturned’? This expression alludes to an ancient Greek legend about a general who buried a large treasure in his tent when he was defeated in battle. Those seeking the treasure consulted the Oracle of Delphi, who advised them to move every stone. In modern idiom terminology, if you look everywhere to find something, or try everything to achieve something, you ‘leave no stone unturned’. That was Bethel when it came to the gospel, you and your salvation; no stone left unturned and no pieces missing. Bethel didn’t have a crush on the gospel. He was head over heels in love with it. He loved the church, he loved souls and many, many times he walked through life’s storms to deliver ‘all the pieces’.


‘For I have not shunned to proclaim to you the whole counsel of God’ Acts 20:27.

The legacy he has left should be readily understood not only by his children and family, but by anyone who truly knew him. The preacher who studied to show himself approved unto God, after his children were in bed. The husband who kneeled at his bedside to pray with his wife. The Christian whose prayers ‘you could feel’ when he prayed in public. The man who knew his weaknesses and was not afraid to ‘fess up’. He knew his strength was in the Lord whom he served. He realized in life that love is, ‘having to say you are sorry’ and that it also means a lesson taught and a lesson learned. In that, he was a great student.

In my early Christian years often the things he taught me ‘in the moment’ were for ‘the rest of my life’. The times my wife Bev (his daughter) and I would accompany him to homes and hospitals for bible studies. The times we would travel hundreds of miles to meet and break bread with new Christians or attend preachers’ meetings or host and/or set up weekly television programs promoting the gospel. He knew what it was like to reach out to those in prison. Bethel and his wife Blanche epitomized Matthew 25:35-36 (I was sick and…). When I was a college ‘kid’ and new in town, I fit in there somewhere.

Of the many things one could learn from him was ‘how to wait upon the Lord’, how to ‘hope in the Lord’ Isaiah 40:31. Before becoming a Christian, we would have some amazing religious discussions. He had this thing for taking the salvageable parts of what I said and building upon them constructively. He did this all with a disarming smile. I soon realized the bigger the smile, the more ‘off base’ I was.

In my years in media I met many Prime Ministers, Cabinet Ministers, business and religious leaders and scholars from all walks of life, secular and non-secular, in and not of the church. I never met anyone, any better than him at practicing 2 Timothy 2:15 (approved unto God…rightly dividing) and believing 2 Timothy 3:16, 17 (God-breathed…fully equipped).

As my wife and his daughter Bev puts it, Bethel’s and his wife Blanche’s passion for ‘living for the Lord’ was the hub of the family. All spokes ran from that center and made the wheel of their lives go ‘round. The discipline of bible reading and prayer was part of the chassis of daily life after every supper before going out to play.

Many, many children were ‘fostered’ into and through their lives and while they didn’t have a lot, they shared what they had. Nobody was turned away. They were the ‘welcome mat’ to their home in word and in deed. Whether Cornwall, Kingston, Sudbury, Ice Lake, Selkirk and many other places in Ontario and the West, many of you reading this, know this well. They went out to you and they welcomed you in.

There’s so much more that could be said, but I’m sure many of you have your own good memories. I pray that the churches ‘present’ learn from the churches ‘past’ and those servants like Bethel, who lived and breathed ‘Thus says the Lord’, -for ‘futures’ sake.

Well done, good and faithful servant! You have been faithful with a few things; I will put you in charge of many things. Come and share your master's happiness! 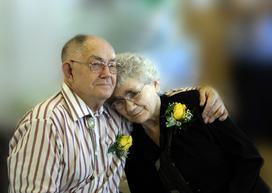 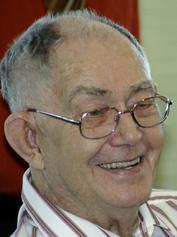 While Bethel is truly missed by his family and the many he and Blanche befriended over the years in this life,

we rejoice that by God’s grace, he has been called home to be re-united with his soul mate.

The service was led by Stuart Bailey, Wesley Bailey and Allen Bojarski.

Interment was conducted by Edward Klym