Henry Ciszek, well known for his evangelistic work in Poland and Lithuania passed away in his 83rd year, Tuesday January 11th in Cornwall, Ontario.
​

Henry was born August 14, 1916 in Ellsworth, Pennsylvania. His family moved to Poland when he was nine years old. Henry was instrumental in establishing the church in Warsaw, Poland during difficult periods of the cold war and communism. It was there, he was arrested during a church meeting that was being held in an apartment. They were right in the middle of singing the hymn ‘Holy, Holy, Holy’ when the police raided the services and escorted Henry off. He was eventually sentenced to four years in prison, serving three before being given amnesty. His Polish citizenship was immediately revoked and he was ordered to leave the country within five days. The communist government charged him partly with ‘attempting to destroy the economy of Poland’. In effect, his crime was ‘preaching the gospel’, which he continued to do while in prison. He immigrated to Canada in 1971. Over the years, especially with the downfall of the Berlin Wall and Communism Henry was able to return to Lithuania and continue his work. He had a special love for the work in Klaipeda.

Henry was attending the church of Christ at Dover in Cornwall and for many months before his passing, added greatly to the work locally. Evangelist Allen Bojarski says the local church of Christ was fortunate enough to have some of his moments recorded on video tape. In one of them he expressed how with hindsight, his years in prison were some of the best times of his life. The evangelist says words cannot adequately express how much they came to appreciate Henry in their midst. He was dedicated to the truth and spoke boldly as he ought to speak. His work in Poland is epitomized in his book ‘Obey God Rather Than Man’. Henry knew physical as well as spiritual hardship in many ways having battled both cancer and asthma.

His funeral service was conducted by Allen Bojarski, Jeremy Bojarski and Bethel Bailey, Saturday January 15th at LaHaie and Sullivan Funeral Home. During the service a couple of video excerpts were played which had captured the personality and spirit of Henry’s contribution.

An example of Henry's spriteness emerged during a lengthy interrogation by two state officials who tried to bait him into an argument. After listening to the officials run down the idea of democracy for some length of time, Henry decided it was his turn to speak. After comparing the advantages of freedom to the slavery of communism Henry concluded with,

"Many have never made it. But there were those who did, on foot, swimming ashore, in boats, home made airplanes, hijacked passenger planes, camouflaged cars, locomotives, army jets like the Mig 21, digging tunnels and even causing blackouts so they could walk on the electrical wires in the air to reach the West. This is the human drama to reach freedom. In some cases even communists made their way to freedom in America. Strange that you never hear of anyone 'escaping' from America to the Soviet Union!"

​He leaves behind his wife Nelly (Fedorovna Timoshinova) and daughter from a previous marriage, Anna Duvrova of Lithuania.

The Eulogy was given by Jeremy, the sermon by Allen, with colloquy also given by Bethel Bailey of Sudbury. A reception followed. Special thanks to Bev Bojarski, Mary Campbell and Lisa Bourgon.

If anyone speaks, let him speak as the oracles of God. If anyone ministers, let him do it as with the ability which God supplies, that in all things God may be glorified through Jesus Christ, to whom belong the glory and the dominion forever and ever. Amen. 1 Peter 4:11 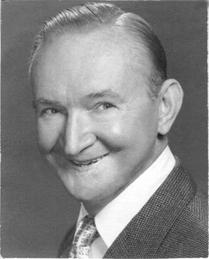 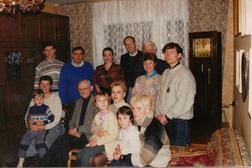 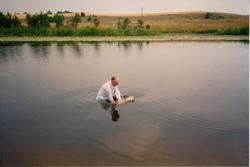