As Jesus went on from there, two blind men followed him, calling out, "Have mercy on us, Son of David!" When he had gone     indoors, the blind men came to him, and he asked them, "Do you believe that I am able to do this?" "Yes, Lord," they replied. Then he touched their eyes and said, "According to your faith will it be done to you"; and their sight was restored. Matthew 9:27-30

For you are receiving the goal of your faith, the salvation of your souls.      1 Peter 1:9

Later Jesus appeared to the Eleven as they were eating; he rebuked them for their lack of faith and their       stubborn refusal to believe those who had seen him after he had risen. Mark 16:14

Yet at the same time many even among the leaders    believed in him. But because of the Pharisees they would not confess their faith for fear they would be put out of the synagogue; for they loved praise from men more than praise from God.              John 12:42-43

So then faith comes by   hearing, and hearing by the word of God. Romans 10:17

for whatever is not from faith is sin. Romans 14:23b

"Have faith in God," Jesus answered. "I tell you the truth, if anyone says to this mountain, 'Go, throw yourself into the sea,' and does not doubt in his heart but believes that what he says will happen, it will be done for him. Therefore I tell you, whatever you ask for in prayer, believe that you have received it, and it will be yours.     Mark 11:22-24

WHEN YOU WALK BY FAITH NOT SIGHT

If I am delayed, you will know how people ought to conduct themselves in God's household, which is the church of the living God, the pillar and foundation of the truth. 1 Timothy 3:15

He replied, "Because you have so little faith. I tell you the truth, if you have faith as small as a mustard seed, you can say to this mountain, 'Move from here to there' and it will move. Nothing will be impossible for you."
Matthew 17:20

"Come," he said. Then Peter got down out of the boat, walked on the water and came toward Jesus. But when he saw the wind, he was afraid and, beginning to sink, cried out, "Lord, save me!" Immediately Jesus reached out his hand and caught him. "You of little faith," he said, "why did you doubt?" Matthew 14:29-31

The woman came and knelt before him. "Lord, help me!" she said. He replied, "It is not right to take the children's bread and toss it to their dogs." "Yes, Lord," she said, "but even the dogs eat the crumbs that fall from their masters' table." Then Jesus answered, "Woman, you have great faith! Your request is granted." And her daughter was healed from that very hour. Matthew 15:25-28

And I, brethren, when I came to you, did not come with excellence of speech or of wisdom declaring to you the testimony of God.
For I determined not to know anything among you except Jesus Christ and Him crucified. I was with you in weakness, in fear, and in much trembling. And my speech and my preaching were not with persuasive words of human wisdom, but in demonstration of the Spirit and of power, that your faith should not be in the wisdom of men but in the power of God.              1 Corinthians 2:1-5

For we walk by faith, not by sight

WATER THAT DROWNS YOU CAN ALSO SAVE YOU!

The centurion replied, "Lord, I do not deserve to have you come under my roof. But just say the word, and my servant will be healed. Matthew 8:8

I see images of Christians being slaughtered for their faith---- blood everywhere, children- young adults -grown men/women- willing to die rather then deny Christ------ it takes my breath away. What I don't understand is when Christians celebrate Halloween,     decorate with gory bloody images, put up skeletons and images of death and darkness, without a second thought! And they will argue and debate trying to make it okay and refuse to give up celebrating that nite!

I am an ex-witch, saved by the blood of Jesus Christ, when I was practicing witchcraft, Halloween was the biggest night of the year for those practicing the occult. People try to say it's about the candy and fun, it goes way deeper then that! The roots of this highly pagan holiday remain the same, it's a night of death -darkness- gore---- and no matter how much you dress it up to make it pretty, no matter how many excuses you make, it's a night to celebrate Samhein-------- the god of the dead. I don't recall those who    practice paganism coming on Christmas morning to celebrate the birth of Jesus Christ the Lord of life. Yet Christians will  celebrate the pagan ritual of Halloween -----the god of death and darkness. I don't care to debate.... You can do whatever you choose ----but it won't change the truth or the facts!!!!

HALLOWEEN in the last three years has gone viral in Canada – and it shot up again in 2015, to the tune of $1 billion. Canadians have become so wild about Halloween we now spend more per capita on costumes, candy and décor than our U.S. counterparts, with holiday-related spending that is second only to Christmas. In Canadian dollars $1 billion is the equivalent of sponsoring 2,032,520 children in third world countries with basic education, food, clean water, shelter and medical care for one year. It’s projected that Americans will spend $6.9 billion on Halloween in 2015. On the U.S. side $6.9 billion equates to sponsoring 19,166,666 children with the same basic needs for year. In the United States alone, $465 billion was spent on Christmas (2014)and $16.8 billion on Easter. Would it be unrealistic to consider what even diverting ten per cent would accomplish?

The kingdom of heaven is like a mustard seed, which a man took and planted in his field. Though it is the smallest of all your seeds, yet when it grows, it is the largest of garden plants and becomes a tree, so that the birds of the air come and perch in its branches. Matthew 13:31-32

Beloved, while I was very diligent to write to you concerning our common salvation, I found it necessary to write to you exhorting you to contend earnestly for the faith which was once for all delivered to the saints.        Jude 3

He replied, "If you have faith as small as a mustard seed, you can say to this mulberry tree, 'Be uprooted and planted in the sea,' and it will obey you.

Without warning, a furious storm came up on the lake, so that the waves swept over the boat. But Jesus was sleeping. The disciples went and woke him, saying, "Lord, save us! We're going to drown!" He replied, "You of little faith, why are you so afraid?" Then he got up and rebuked the winds and the waves, and it was completely calm. The men were amazed and asked, "What kind of man is this? Even the winds and the waves obey him!" 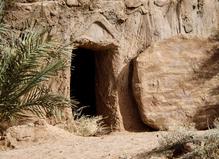 the Way the Truth the Life

WHAT KIND OF MAN THIS IS

THE FOLLOWING WAS POSTED TO FACEBOOK. IT IS UNEDITED. You may have already seen it.

AS THE BODY WITHOUT THE SPIRIT IS DEAD

SO FAITH WITHOUT WORKS IS DEAD

When the Son of Man comes, will he find faith on the earth? Luke 18:8